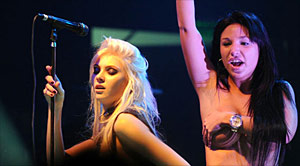 During the song “Goin’ Down”, which is the third track on the self-titled debut EP, a pair of busty female fans got called up on stage to join the show that night with Momsen, and all the fun between the hot trio was captured on video right below. One lucky photographer managed to capture the money shot when Momsen pushed herself a little further by lifting her shirt to bare a nice set of grip-taped nipples to the crowd. Although the memorable moment only happens for a few seconds, these pictures will definitely last a lifetime.

The Setlist That Night: