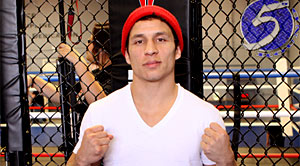 Thrill-seeking UFC 152 main event and co-main event fighters Joseph Benavidez and Demetrious Johnson, and Michael Bisping and Brian Stann, found themselves on top of the Western Hemisphere on Wednesday, squaring off for their UFC 152 bouts from the ledge of the iconic CN Tower in Toronto.

In town to announce that tickets for the inaugural and historic flyweight championship fight on September 22 at Air Canada Centre will go on sale to the general public on Friday, July 27, the fighters went on the EdgeWalk, a terrifying “walk” on the 1,168 ft ledge of the 1,875 ft-tall CN Tower. Towering over the Toronto harbour and cityscape, the world’s top 125-pound fighters, Joseph Benavidez and Demetrious Johnson squared off as they took in the view from the world’s fifth-tallest and the Western Hemisphere’s tallest free-standing structure. Following closely behind them on the world’s highest full-circle, hands-free walk, UFC middleweight title contenders Michael Bisping and Brian Stann squared off for their highly anticipated co-main event. The fighters were tethered to an overhead rail system and walked around the edge of the CN Tower’s main pod above the 360 Restaurant on a 1.5-metre (4.9 ft) metal floor. UFC 152: BENAVIDEZ vs. JOHNSON on September 22 marks the second of three UFC events taking place in Canada in 2012, following UFC 149: FABER vs. BARAO in Calgary this past Saturday and ahead of UFC 154 in Montreal on November 17. The UFC 152 card will also feature the return of UFC legend BJ Penn, as he takes on rising Canadian welterweight star Rory MacDonald. In addition, Calgary’s TJ Grant looks to extend his winning streak to three when he meets Evan Dunham in a lightweight contest.