How To Get Laid At A Metal Fest 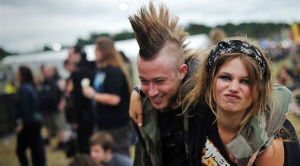 How to Get Laid at a Metal Fest – Credit: Bethany Clarke/Getty Images

Metal girls are easy, so the task of getting laid at a metal fest is a simple one. Just kidding. Being easy is an unfortunate reputation that metal girls have had to bear for decades. But I imagine that there’s truth to be found somewhere in the mythology of the metal girl (maybe it has to do with the groupies).

While your number one priority should always be the music, metal fests are long, all-day events that present countless opportunities. They’re full of hot, scantily clad women/girls, who are high on the scene and living a day that they want to remember for a lifetime. They’re out of their norm, they’re looking for a good time, and they may be willing to take a ride on the wild side.

There are plenty of things you shouldn’t do if you want to get laid at a metal fest, such as getting sloppily drunk and pissing yourself, or that new shitty hardcore dancing trend. But you should have no qualms about dropping some roofies in her drink. OK, that’s a bad joke, and if we ever catch someone doing that, we’re going to throw him in a circle pit and trample that fucker.

Below are five basic tips to help you, but we can’t guarantee that they’ll definitely get you laid at a metal fest. The most important thing is to be yourself (yes, that sounds like we’re using your mother’s advice), because women/girls can see through bullshit.

On with Yell! Magazine’s tips on How To Get Laid at a Metal Fest:

Yes, I feel like I’m not really giving advice here, but it’s true: If you’re in a band, you get laid. It helps if your band is playing at the venue, but it’s not a prerequisite. For that matter, it’s not exactly necessary to actually be in a band to score with a chick. You’ll just have to be convincing in your deception, and hope to hell that you don’t get busted. Ultimately, however, this all boils down to being confident. So, know yourself, know what you like, be genuinely interested in her thoughts and opinions, and you’re well on your way to getting laid at a metal fest.

No.4 Introduction and Follow-up

Don’t expect to meet a chick and close the deal in one meeting. You’ll have to spot a girl that you’re interested in, chat her up a little, get her name, and move on. (Actually, you might do this with a few different women/girls.) After a few hours, be on the lookout for the woman you talked to, and if you enjoyed what she had to say, go talk to her again, and follow up on the topics of the previous conversation. This second time, however, you’ll have to take things to the next level. You’ll have to be more witty, more charming, more flirtatious, etc. Offer to buy her a drink or something to eat, and then find some grass to sit on or a tree to sit under.

No.3 Remember Her Name

Yeah, forgetting her name when you “run” into her a second time isn’t a good thing, for two main reasons. One, it shows that you’re not really interested in her. Maybe you’re not, and you only want a one-off thing with her, but she has to think that you are into her. Two, it’ll create an awkward situation, and you’ll feel like a dumbass.

Not only should you remember her name, you should remember other details from the first conversation, such as which band she’s most excited to see. That’s part of the follow-up shit.

Part of not looking desperate is knowing when to walk away. Sure, the conversation might be going well, but you gotta go; you’ve got bands to see and friends to hang with. Remember, the music is your number one priority. Just when things are getting interesting and going smoothly, know when to say, “catch you later.” Also, you might keep an eye on her from afar, but don’t let her know that; you have to make subsequent run-ins with her seem casual and accidental. Note that some women might like it if they catch you watching them, but don’t make it creepy, asshole.

Even if you don’t smoke, you’re “holding for a friend.” Like I said in the intro, girls at metal fests are looking to have a good time and break out of their normal routine. So, even if they’re not a regular smoker, they might be interested in a couple of hauls of the magic herb. Besides, sitting under that tree, with great music in the background supporting your great conversation, can only be enhanced with some bud. And not that you need it at this point, but pot helps take the edge off, and girls often get a little flirty with it in their system.

That’s all I’ve got at this point. If all else fails, bring a “SECURITY” T-shirt and threaten to kick out a hot girl for something you “saw” her doing. She may offer a bribe.