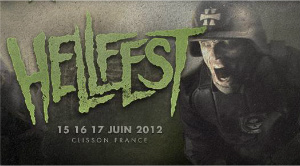 Anyway, since we missed Hellfest 2012 and its killer lineup (for real, check it out on the official website at www.hellfest.fr – a total fucking dream come true), we were happy to come across this time-lapse video. It pretty much makes up for our lack of attendance, but that’s not to say that it compensates for it. Actually, who are we kidding? There’s no way a time-lapse video could make up for not being there. That would be like a 13 year old watching CNN memorial coverage of 9/11 and then saying he lived it.

Each year, since 2006, Clisson, France, which is about 250 miles south of Paris, has been home to Hellfest. The fest has come under the scrutiny of certain religious groups and politicians, condemning the event as satanic. Obviously they’ve never spent an hour with a metalhead, if they had, they would realize that we are among the most docile, peace-loving, socially aware motherfuckers on the planet.

Anyway, check out the Hellfest 2012 time-lapse video. You won’t regret it.