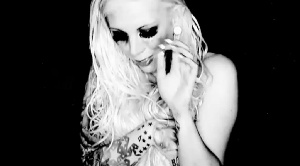 Get ready to bleed for Maria Brink in In This Moment’s first video of off the forthcoming Blood.

Earlier this week In This Moment released the official video for “Blood,” the first track off of the forthcoming album (due out August 14) of the same name.

With the current profusion of Snow White adaptations, one could safely assume that In This Moment were vying for a spot on the soundtrack. However, “Blood” would be a late entry at this point, so it’s much more plausible that the band was inspired by the surplus. Specifically relatable, the “Blood” video features bloody apples, bleeding hearts in the palms of hands, and Maria Brink in regal fashion. Yeah, the video is rife with horror elements, including a harem of faceless women, blood dripping from fingertips, containers of some substance being polluted with blood, Chris Howorth’s guitar drenched in blood, and much more. But, “Blood” is also sexy as all hell get out. Bare-breasted women? Yeah, OK. Maria Brink nearly kissing some of them? Sure. Maria Brink standing around naked? Oh, hell yes. If her attempts to bashfully cover her breasts with her arms and hands looked any more appetizing, I might have to start stalking her.

I’ve already commented on the song “Blood” in a previous update, so I’ll leave that where it is. All I can say now is that I like the song even more, and this is one of the best videos I’ve seen all year. I’m always glad when a band cares enough to include theme in their music videos.