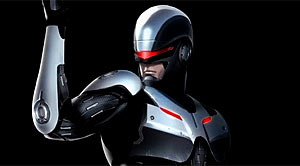 Here is a first look at what people believe is the official RoboCop teaser poster.

My suspicion is that it could very well be another fan-made poster considering if you compare it with the recent photo below of another RoboCop banner. That also looks a lot more refined. You can see that some of the graphical elements differ from one to the other, specifically the style of the font in the logo. But on the other hand, this could be 100% legit, and I’m just trying to raise some doubt. Shame on me!

RoboCop (2013) banner photo taken at the Licensing Expo 2012 in Las Vegas by Comingsoon.net.

At least some of the elements in the artwork are consistent, and both clearly state RoboCop is scheduled for summer 2013. Yay!