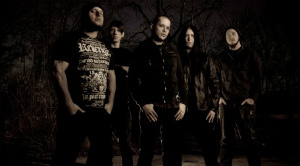 Dirge Within has just premiered “Memories,” the debut single/video from their sophomore effort, There Will Be Blood, which was released back in April. How it takes three months to release a debut single is beyond me. Maybe the band just recovered from the album launch party.

Anyway, the members of Chicago-based Dirge Within have a confusing look, one that ranges from emo/metalcore to rockabilly. With chugging riffs and punkish melodies mixed with rock solos and metal skin bashing, it was a surprise to hear straightforward vocals (i.e., no metalcore wails of sorrowful misery).

As far as the video for “Memories” goes, guitarist Shaun Glass had this to say:

“This was easily one of the best video-making experiences I have ever been part of… No waiting, no egos, just a great vibe, and I think it translates the truly emotional words that this song sends out to the listener.”

Dirge Within “Memories” the Making Of:

Aside from the new music video, Dirge Within will also play the WIIL ROCK Fest, set to take place in Twin Lakes, Wisconsin on August 11th. The growing line-up already features genre heavyweights All That Remains, Static X, Fear Factory, and more. Additional bands will be announced in the coming weeks. Head over to www.wiilrockfest.com for complete details.