Vocalist Tim Lambesis From “As I Lay Dying” Getting Ready For The UFC? [PIC/AUDIO] 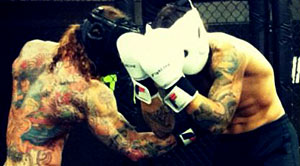 Um! Not quite yet if you were expecting a “yes” answer. But this new picture posted yesterday on the official As I Lay Dying Facebook fan page does, however, have us asking that question.

As much as we would love to see a transition from heavy metal star to top UFC contender, we most likely won’t see this happen any time soon. Although, vocalist Tim Lambesis would very well be the first choice on our list of potentials. He’s got the right build for it, and he’s already mentally disciplined to keep in shape during a tour, which, to be frank, is near impossible considering all the booze and junk food these metal stars are exposed to.

We have seen football players, like Herschel Walker and Matt Mitrione, move over to the MMA. So, why not capable heavy metal stars? And why not start with Tim?

In our recent interview with Tim Lambesis, he stated (audio below) that if a fight was presented to him that he would probably be alright. Really meaning that the other guy has no chance whatsoever, and should run away.

Tim Lambesis (As I Lay Dying) Training Inside The Cage