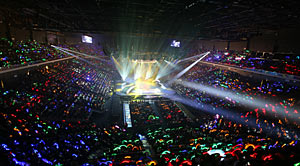 The Ultimate Fighting Championship organization continued its foray into new territories today, officially announcing its first-ever event in the People’s Republic of China, and its second event in Asia this year. Macau, a Special Administrative Region of China located off the mainland’s southern coast, will host a UFC event on November 10, 2012.

The event will take place at The Venetian Macao-Resort-Hotel’s CotaiArena, a 15,000-seat venue which has established itself as the top live-entertainment location in southern China. The fight will be broadcast by FUEL TV in the US market, and by numerous UFC television partners around Asia and globally.

“Breaking into a market with a population of over 1.3 billion is both a testament to the growth of our sport and a long-term challenge we are excited to undertake,” said Lorenzo Fertitta, UFC Chairman and CEO. “This is just the first of many world-class fights we plan to hold over the coming years in China, one of the birthplaces of
martial arts. The world-class CotaiArena in Macau is an ideal place to start this journey.”

“Sands China is thrilled to introduce UFC to Macau forthe first time,” said Edward Tracy, President and Chief Executive Officer, Sands China Ltd. “Our continuing mission is to bring the best entertainment events to the region, cementing Macau’s place as Asia’s entertainment hub. It’s our pleasure to be working with the UFC organization to bring such a major sporting event for the enjoyment of Macau’s visitors andlocals alike.”

Over the last several years, the UFC has built its broadcast reach in China to more than 450 million television viewers via a dozen provincial broadcasters, and more than 500 million unique viewers through the nation’s leading internet portals. UFC fighter Zhang Tiequan leads a growing group of professional MMA fighters in mainland China, several of whom are candidates to make their UFC debut in Macau.

“This event is a major step in the development of the UFC brand in this region of the world, and China in particular,” noted Mark Fischer, UFC Managing Director of Asia. “We are delighted by this opportunity to build on the media growth and attention we have received and to finally bring a live event in prime time to the millions of fans in this area, and especially to those lucky enough to come and experience all the excitement of the UFC in person.”

Ticket information and fight card announcements to be made at a later date. For more information or current fight news, visit the official UFC site.