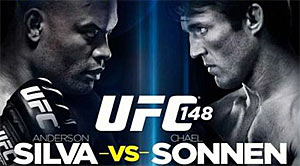 Reigning UFC middleweight champion Anderson Silva is usually one of the most respectful and sportsmanlike mixed martial artists on the Ultimate Fighting Championship roster. However, on today’s media conference call to promote what UFC President Dana White said is one of the biggest sporting events of the year – the July 7 UFC 148 main event against bitter rival Chael Sonnen – ‘the Spider’ sounded off like never before. Irate at two years of taunting from Sonnen, Silva took the opportunity to sound a warning to the man who came within two minutes of taking his title in August 2010.

“I’m going to break his face and every tooth in his mouth,” Silva said through his interpreter and manager Ed Soares. “I know he’s on the call listening to this and playtime is over. There’s no more talking from him. I’m going to beat him out of the UFC. I’m going to make him pay for everything he’s said about me, my family and my country. I’m going to beat him maybe like his parents should have to teach him some manners. I’ll teach him those manners myself.

Sonnen was disconnected from the call but later said: “People can’t understand why I’m not getting caught up on the hype of Anderson Silva, but he can’t take the magazine covers and press stories into the Octagon with him. He’s just a man with two arms, two legs – and I’m going to beat him on July 7 because I want it more than he does.

“I don’t need anything in my life – but I have to have that belt. Everything I’ve done, everything I’ve worked for and sacrificed – everything I have in life – I would give it all away to be the UFC champion for just one night.”