The Future Of Horror On TV 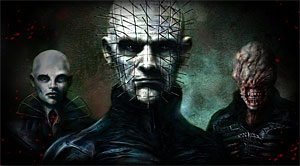 I don’t think that I’ve ever been more excited for a TV series in my life. Never before brought into the realm of television, the Clive Barker-created world of Pinhead and the Cenobites seems like something that would never in a million years get broadcast into households on a weekly basis. When news of this was spread, the response was either “AWESOME!” or “How?” or “Is it going to be anything like the ninth movie? God, I hope not.” I was in the first and third camps with it. As long as it stays far away from resembling anything close to Hellraiser: Revelations, a movie so bad that it could persuade Pharaohs to release their slaves, I’ll be more than happy.

While there have been nine Hellraiser films overall, long-form story-telling has not been exploited with this series. Therefore, there is a multitude of ways that a Hellraiser TV show could turn out. Will it be primarily a drama, with the realm of the cenobites only being used on special occasions? Or will it be all-out fantasy? I think the answer to that lies primarily in the budget, and despite the fact that, critically, the Hellraiser franchise hasn’t had the best track record, this is the most interesting potential series for me, because I have no idea what to expect with it.

I don’t know what high-level producer decided that the world was clamoring for a Munsters series that wasn’t really called The Munsters, but apparently the demand was huge. Huge enough for a remake of The Munsters, set to feature toned-down versions of the characters and a more dramatic atmosphere. Out of the four series on the future portion of this list, this is potentially the poorest decision; unless a miracle happens, it will be a train wreck. Despite its status as a classic, there’s not a lot of interest in The Munsters anymore, and there’s even less positive interest in a Munsters series that isn’t titled The Munsters. Will it still be comedic? Hopefully so, considering that I’m going to find it hard to take a dramatic show seriously when it’s about a family with the last name “Munster.”

Really, the only redeeming quality to the news about this is Eddie Izzard is playing Grandpa. Playing Herman Munster will be Jerry O’Connell. You remember Jerry, right? He was the porno-director in Piranha 3-D who got his penis bitten off. Who else could they have possibly gotten to play Herman Munster besides most other actors in the world?

This series will chronicle Special Agent Will Graham and his relationship with psychiatrist/awesome cannibal, Hannibal Lecter. The Hannibal series has always played a balancing act with its main character. It has to keep him in the spotlight, considering that he’s who the films are based upon, and it has to keep up his mystique, so that we stay interested in him. Will a 13-epsiode season (or possibly more than that) keep us continually guessing about Doctor Lecter? Let’s hope so.

This is an important thing to consider with all of horror on TV. So much of suspense is built around the continuation of tense plotting and character building. Will a TV show be able to sustain that? We’ve seen it happen in shows like Breaking Bad, but will these new horror series end up trying too hard or collapse under the weight of their own efforts? A big problem that people have had with The Walking Dead is that the intensity is sometimes let down by flawed characterization and stupid decisions. A Hannibal series will rely heavily on keeping audiences on the edge of their seat. The creators of horror TV are going to have to keep an extremely close eye on what they are doing. Keeping up suspense for 90 minutes is hard enough. But for 13 straight hours? I wish them the best on that.

Horror devotees might ask themselves, “Isn’t Bates Motel the name of the failed Psycho-based pilot from the 1980s”? Yes, yes it is. But A&E has decided to revive it, and turn it into a show based around Norman Bates and his early progression into becoming the bird-stuffing, shower-peeping killer we know today. A show like this is probably going to take a lot of liberties with its source materials in order to keep us interested, so I’m not expecting something extremely close to the original film. Do I expect homages, like I would with all four of these series? (They’re all based around existing concepts and properties.) I do. But with Bates Motel, considering that I’m in no way a Psycho purist, I’d like to see what they can do with the general concept of Norman Bates and how they can change it, and still keep it entertaining.

That’s another big thing to consider. Now that a story line has to be crafted to fit a season’s worth of a show, what will change? Will every little plot point be explained and what new ones will be invented? Will the core concepts remain while entirely new ones are added around it? We’re just going to have to wait and see. I, for one, am extremely interested in the future of horror on TV. One might cry foul at the fact that all these ideas “have been done before,” but when the idea is as good as Pinhead or Norman Bates, I say that we should welcome any attempt to breathe life into the franchises. Because, really, who wants to end the series with Psycho IV?