RoboCop (2013) To Be Diagnosed With Lupus – Hugh Laurie Casting Possibility? 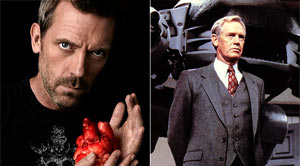 Sure, it’s yet another Hollywood remake that I’m on the fence about seeing, but things just took a turn for the awesome with the new RoboCop remake.

TV’s own cynical Dr. House, Hugh Laurie himself, is reportedly in talks to play the villain in MGM’s upcoming remake of the classic cyborg action film. At the time of this news, MGM has no comment on the casting. Hugh Laurie would be taking up the role of the CEO at Omni Corp, the company who creates RoboCop for it’s own gain. The role was originated by Ronny Cox in the 1987 film.

TV’s The Killing‘s Joel Kinnaman is set to play the title character, with Gary Oldman as the scientist who creates him and Samuel L. Jackson lined up as a patriotic media mogul. The film is currently being helmed by Elite Squad director Jose Padilha and a screenplay by Quantum of Solace writer Josh Zetumer. With a cast this great, it’s no doubt that the addition of Emmy-nominated, Golden Globe winner Hugh Laurie would make this a definite must-see summer blockbuster – unfortunately, none of us will get to see it till a (targeted) release date of August 9, 2013.