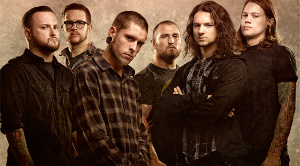 Whitechapel has released three videos in a series that was filmed during the recording process of their new self-titled release, which will be released June 19th on Metal Blade Records.

The first video (above) in the series provides an in-depth look at the drum tracking process.

The second video focuses on the recording of the guitar parts.

And, finally, the third video focuses on the vocal tracking process.

Having spent several years lauded as one of the frontrunners in their genre, in 2012 Whitechapel stand as a defining force in contemporary heavy music. Building dramatically on the trademarked bludgeon of their first three releases, with Whitechapel the Tennessean sextet have inarguably delivered their most intense, dynamic, and downright hostile record to date. Drenched in atmospheric darkness, the record is also rife with gripping melodies that drag the listener into the tumult, willing or otherwise, and across its 10 tracks it is infused with an emotional depth that pointedly separates the band from the plethora of two-dimensional mosh-starters that have sprung up in their wake.

The album was engineered and mixed by Mark Lewis (Black Dahlia Murder, DevilDriver), who also handled production duties alongside the band. The album artwork was created by Aaron Marsh of Forefathers Group with art direction provided by Whitechapel.

The first single from Whitechapel entitled “Hate Creation” is available for streaming. Check it out and be sure to pre-order your copy of the album.

Returning to their rightful place on the road, the band is enthused to take these new songs to their rabid fan base. Whitechapel will be a part of this summer’s Rockstar Energy Drink Mayhem Festival, which starts June 30th. A complete list of all tour dates can be found below.