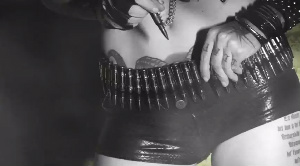 Holy shit this is awesome. Catchy riff. Nice bass line. Rippin’ solos. Halford-esque vocals. Hot leather-clad and tattooed women. It’s old-school metal. What in hell is there not to like about this band, song, and corresponding video? “Metal Woman,” with a video debut today, should be on every metalheads playlist as of right now. It’s certainly going on Yell! Magazine’s must-listen-on-repeat playlist.

Paying homage to the women of the metal subculture by singing their praises, pointing out that they’re tough and fierce, is the best way to show gratuitous shots of sexy vixens in your video. I particularly love how there’s a primary metal woman, who appears to make a habit of driving around recruiting newcomers to the fold. She’s seen in her van picking up two younger girls who are clearly on the path toward metal, but our metal woman is there, like a vampire looking for companionship, to pick them up and convert them to the lifestyle.

“Metal Woman” appears on 3 Inches of Blood’s fifth studio album, Long Live Heavy Metal. No, these guys aren’t making a statement at all.

3 Inches of Blood will be heading out on the road this June along with Municipal Waste and Black Tusk.