Cattle Decapitation Streams Monolith Of Inhumanity, Gets Added To Shockwave – Hope You Survive 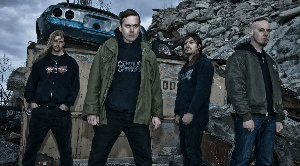 Cattle Decapitation’s latest effort leaves me pretty speechless. It’s blistering, frenetic, insanely good, technical, and a neck breaker. I haven’t been this confused since getting into metal… or going through puberty. Sure there are tons of guests on Monolith of Inhumanity, but Travis Ryan’s vocals are all over the metal map, and Derek Engemann bass interludes are nothing but amazing.

Check out the press release below… and farther down are the tour dates, including the Shockwave Festival.

MetalSucks has been serving up some raw death-grind metal with an exclusive stream of Cattle Decapitation’s Monolith Of Inhumanity. Set for a North American release on Tuesday, May 8, 2012, the 11-track long player is an achievement that stands out as one of the most volatile, ambitious, and impossible-to-pigeonhole records of 2012.

Produced by Dave Otero of Denver’s Flatline Audio, Monolith Of Inhumanity sees the band investigating inventive new techniques in songwriting without abandoning their signature formula of confrontational audio wreckage. Conceptually, the record revolves around a potent distaste for contemporary civilization and the damage wrought in the name of progress. In addition, Monolith Of Inhumanity features a host of guests including Mike Majewski of Devourment (guest vocals on “Projectile Ovulation”), Lenard Leal of Cephalic Carnage (backing vocals by on “A Living, Breathing Piece of Defecating Meat”), The Cephalic Carnage Community Men’s Choir, consisting of all current Cephalic members and alumni Jawsh Mullen and Zac Joe (gang choir vocals on “The Carbon Stampede”), and ambient and noise interludes by Los Angeles’ most extreme decimator of sound, John Wiese.

Sear your eardrums at MetalSucks.

Cattle Decapitation will also crush souls on this summer’s Shockwave Festival Tour 2012, announced earlier this week. The band will be joined by Fear Factory, Voivod, Misery Index, Revocation, Havok, Dirge Within, Last Chance To Reason, Vildhjarta, The Browning, and Forged In Flame.

“It’s been a great start of the year for us, what with the new album already getting great reviews from fans and press and all, but we’re very excited for the announcement of this kick-ass USA tour. It marks our return to Canadian soil after a three-year absence and is looking to be an extremely heavy hitter. Very honored to be asked by the Shockwave Festival to be a part of it!”

In the meantime, Cattle Decapitation is currently bringing their audio pummel to the stage on the Occupation Domination 2012 tour alongside Origin, Decrepit Birth, Aborted, Rings Of Saturn, Battlecross, and more!