Huntress Release “Spell Eater” – The Hunt Is On [VIDEO] 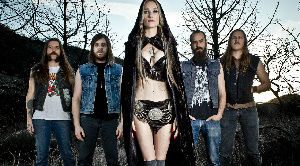 Coinciding with the April 27 European release of their debut album (Napalm Records) Spell Eater, Huntress released a video for the title track. Spell Eater will be released on May 8 in the U.S.

The video depicts the band performing some kind of ritual that leads to the arrival of some being who gives Jill Janus (vocals) a potion. Then at some point Jill gets the power to suck souls out of mortal beings. At the end she kneels to a silhouette of a demon. This is the best I can come up with – I’m not wiccan. The video is also inter cut with scenes of the band playing.

Don’t let the almost metalcore guitar intro to “Spell Eater” fool you; this is a galloping power metal track in the tradition of Iron Maiden. Blake Meahl’s solo is fierce. Carl Wierzbicky is wickedly possessed on drums. And Jill’s vocals are simultaneously enchanting and terrifying. “Spell Eater” is the type of track that inspires, tapping into your creative side or urging you to bash some heads (or lift weights if you prefer).

Check out the video and let us know what you think.