Huntress Wants To Eat Your Heart 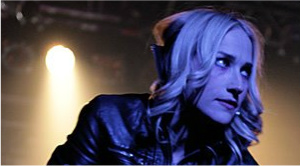 A few nights ago we went to a DragonForce show to interview Herman Li and Frédéric Leclercq (we’ll have that video interview up in a few days, whether you like it or not). However, Yell! Magazine was so impressed with one of the opening acts that we thought it would be an excellent idea to let you in on it. If you’re a heretic and into paganism, witchcraft, power metal, swords, the occult, and satanism, Huntress is the band for you. [Editor’s note: Lead singer Jill Janus is pagan, which doesn’t equate to satanist.] After seeing Huntress live, some research had to be done. Turns out that they’re from California and not Germany, as you might believe if you see them and don’t know who they are. It doesn’t help that Jill Janus speaks to the audience with what sounds like a slight accent, but just chalk that up to her being in character. Even with her quirky accent and odd stage presence (it seems she doesn’t exactly know what to do with herself, but that’ll come with experience), you can’t ignore the power of her voice. She’s a trained opera singer with four octaves and some growl ability. All in all, she’s a great metal vocalist. Currently, Huntress is on tour with DragonForce, but they’ve played a lot of pagan festivals in the last year or so. They signed to Napalm Records in 2011 and their debut album, Spell Eater, is slated for a summer 2012 release. Huntress has a video (directed by Simon Chan of Artificial Army) for their debut single, “Eight of Swords,” which was released in October 2011.

Huntress live is not to be missed, especially if you like pagan power metal and theatrics. Check out the video and we’ll try to get our hands on the debut Huntress album to bring you a full review.