Suicide Monday: 2 SuicideGirls Who Defy The Laws Of Physics 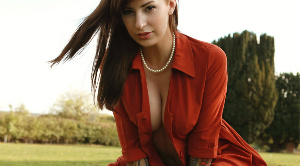 What constitutes a “favorite” Suicide Girl? Well, she has to meet a few of our standards: She should be fairly heavily tattooed and/or pierced, into one or more of our topics of interest (heavy metal/hardcore rap, horror/sci-fi/action movies, MMA, and/or specific types of video games), and seemingly interesting as a person (as best as we can judge from the brief bio SuicidGirls sends us), and sexy.

We showed you Aisline Suicide shortly after Christmas, 2011. Well, she’s back and looking mighty fine lounging about in nature. Her latest set, Mothers Pearls, was shot by another favorite SuicideGirl, Waikiki. So, there are a few things we like about Aisline Suicide: first, she refers to her proportions as “big, medium, big.” OK, her boobs might make her a bit top-heavy, but when it comes to her lower half, she’s anything but “medium, big.” We like to say healthy, curvy, and sexy. Second, Aisline also lists boobs as something she’s into – and with the set of physics-defying pillows she has, it’s not hard to imagine where that obsession came from. Wait, that’s our obsession!

One look at Lumo Suicide and it’s clear that she works out. We wish we could show you some of the athletic poses Lumo put on display in her last photo set, Room Service, but our servers would crash if we tried. Lumo is also into Kung Fu, so she could probably kick our asses. Let’s hope she enjoys our MMA content. Lumo likes facial hair and licking stubble… good thing it’s a prerequisite of employment at Yell! Magazine to grow a beard and shave your legs (just trying to cover our bases). I lost my virginity: To your mom
I am looking for: A woman
My kink factor: I’ll try anything once, especially if you beg for it
My idea of a good time: Stay in and watch old movies on TV What on Earth keeps the alternative beauties in South Africa so, well, beautiful?