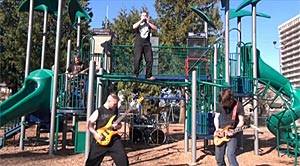 TRIBUNE has taken metal to a new level in 2012 with the multi-metal genre blender displayed on their latest album Elder Lore/The Dark Arts (released March 20, 2012 via Corpse Corrosion Music). “The Succubus” is the first single from the 8 track beast, and the world premiere of the new music video is here. Watch it above, and if you like it, share it with all your metal friends.

Filmed and directed by Terry Anderson and TRIBUNE, the clip shows the band’s lighter side while keeping it heavy.