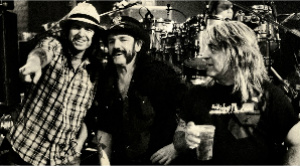 Motörhead has gone on record telling fans not to buy their latest box set. Called “The Complete Early Years,” the box set retails at $639. Presented in a Motörhead-style skull, the set features the band’s first eight albums in CD format, their early singles, some posters, and a photo book.

Normally this would seem like a good idea: well-established band, excellent back catalog, legendary frontman, some classic tracks in their history, and a sold out tour currently underway. But it’s the band itself that’s vocally against this release. Frontman Lemmy Kilmister has been quoted as saying:

“Unfortunately, greed once again rears its yapping head. I would advise against it even for the most rabid completist!

The band have also commented:

“Motörhead have no control over what’s done with these early songs, and [we] don’t want fans to think that the band is involved in putting out such a costly box set.”

Why then, is this being released? Universal Music Group, the band’s former label owns the rights to these early recordings and it appears they’re trying to cash in while the band are on tour across the States and releasing a brand new DVD.

Any die-hard Motörhead fan who’s after new material need look no further than either the 20th LP “The World Is Yours,” released early last year, or the more recent 3rd DVD “The World Is Ours: Vol 1.” If you buy those two items, you’ll still have quite a hefty amount of change from the RRP of “The Early Years” box set, and any metal fan with cash still burning a hole in his or her pocket can pick up all five of Pantera’s “original” albums for the princely sum of $25.43 at Amazon.com.