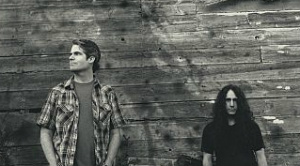 We all know that recording an album isn’t like it used to be. For one thing, band members usually come into the studio on an individual basis to record their parts. But OSI takes modern conveniences to the extreme, proving that band members don’t even need to be on the same continent, much less ever meet in person to make music.

But is that music any good? Well, we here at Yell! Magazine like it, but you’ll have to decide for yourself if their music trips the pleasure centers of your brain.

The super prog-metal group OSI (consisting of Jim Matheos of Fates Warning, Arch/Matheos; and Kevin Moore of Chroma Key, Dream Theater; and with guest drummer Gavin Harrison of Porcupine Tree) released its fourth album on March 27, 2012, and with two songs streaming and a pending video due out next week, Fire Make Thunder is storming up the charts.

I haven’t heard Fire Make Thunder, but judging from the two tracks streaming here and at OSIband.com (“Big Chief II” and “Cold Call”), OSI are producing an atypical brand of prog metal. Check out the songs, read the press release below, and let us know what you think at the bottom of the page.

“Stands miles apart from anything else out there – metal, prog, electronic or otherwise”
–Decibel Magazine

“OSI’s Fire Make Thunder is what progress should mean to progressive metal. If terrestrial radio still played great music, Fire Make Thunder would drift through the ether on the frequency of psychedelic radiance.”
-About.com

Fire Make Thunder, the fourth undertaking for the collaborative duo known as OSI has charted on the Billboard New Artist Chart at #18. OSI also charted on the Top Hard Music Albums Chart at #46. International chart numbers include: #43 on the Hard Music chart in Canada and #139 on the charts in Benelux. The band has recently completed work on a video for the song “For Nothing.” Look for it to debut early next week.

Formed in 2002 by Jim Matheos (Fates Warning, Arch/Matheos) and Kevin Moore (Chroma Key, former Dream Theater keyboardist), OSI is a long distance partnership, both musicians typically writing and recording alone and sending song ideas back and forth for further elaboration. Written and recorded throughout most of 2011, this latest release once again reflects the eclectic influences of both Matheos and Moore.

Returning as the band’s session drummer is Gavin Harrison of Porcupine Tree, this time cowriting one of the tracks with the band. All other instruments and programming were performed by both Matheos and Moore, while vocals and lyrics were handled exclusively by Moore.

All of the recording for Fire Make Thunder, with the exception of drums, was done by Moore and Matheos at each musician’s respective home studio with drums being recorded at Harrison’s home in London. Final overdubs as well as some additional writing/arranging was completed in July 2011, in Jamaica, Iowa, where the band mixed alongside engineer Matt Sepanic at Sound Farm Studio and Recording Environment. Mastering was handled by renowned engineer Roger Siebel. The record was produced by both Moore and Matheos.