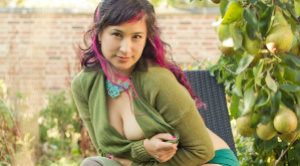 What constitutes a “favorite” Suicide Girl? Well, she has to meet a few of our standards: She should be fairly heavily tattooed and/or pierced, into one or more of our topics of interest (heavy metal/hardcore rap, horror/sci-fi/action movies, MMA, and/or specific types of video games), and seemingly interesting as a person (as best as we can judge from the brief bio SuicidGirls sends us), and sexy.

Eden Suicide is the first SuicideGirl we’ve featured in Suicide Monday who’s into MMA, and it’s about damn time. We do, however, have the feeling that Eden has serious anger issues and a tremendous predilection for blood and violence – just our type. If you ever want to throw down Eden, bring it baby.

Frisky Suicide is the type of girl you want around during *Halloween; she’s a makeup artist who specializes in zombie making. So, yes Frisky, we want you at our next Halloween party if not for your artistry, then for your love for dirty old men.

Yeah, Friskey Suicide caught our attention and she’ll catch yours…