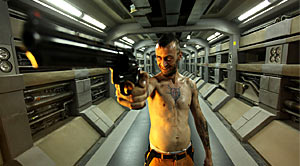 Guy Pearce is Snow, a loose-cannon government agent convicted of a crime he did not commit. He is offered his freedom if he can rescue the president’s daughter from a prison in space that has been overtaken by its prisoners.

Lockout is officially scheduled to be released on April 13, 2012.