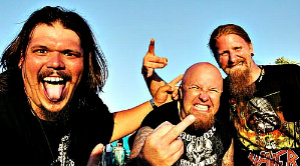 Washington D.C. – The U.S. Supreme Court has determined heavy metal music unsafe and, therefore, has ordered a nationwide and electronic ban on its production, distribution, and sale.

As of April 1, 2012, heavy metal music will be banned throughout the United States. The U.S. Supreme Court heard testimony on Friday from the researchers who conducted the Emotive Auditory Reactionary Equilibrium study at the renowned University of Ninnyhammer.

Head Researcher Dr. Hans Evol stated that, “After observing 30,000 rabid fans at the Mayhem Fest drink excessive amounts of beer and Jaegermeister, pay $8 for a bottle of water, gorge on trans fat all day, get in a pit and come out bloody and sweaty, and in the end share a mutual scream with a friend, it’s evident that this music is causing bouts of temporary insanity and violence that is detrimental to the overall goal of creating a complacent society by means of generic pop.”

As the final decision was announced, Justice Judge Reinhold stated that “heavy metal has plagued our society for far too long.” He went on to say that “heavy metal has damaged our youth and contributed to the destruction of the very fabric from which our great nation conceals itself. The disaffected youth of America need to grow up.”

There have been attacks against heavy metal in the past. During the 1980s there was Tipper Gore and the PMRC, Dee Snider of Twisted Sister defended his lyrics in court, and Ozzy Osbourne was accused of causing teen suicide. The Christian Right organized Fahrenheit 451-style album burnings in an effort to purge the evil from the youth.

When asked what he thought of the topic of deliberations within the halls of justice, a former metalhead (who will remain nameless because he’s since had his gender reassigned) stated, “I think it’s great. Heavy metal is a scourge upon our society. I hit rock bottom when my mom discovered me passed out in the basement with a crucifix stuck in my ass. I’m glad heavy metal will be banned.”