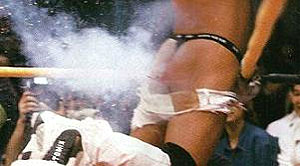 Legendary Yell! Magazine contributor TheMatt passed away yesterday at the tender age of 32. The beloved [Editor’s note: “Snicker!”] writer died from complications from an apocalyptic rectal explosion while engaging in his favorite pastime of grabbing orphan children by their ankles and smashing them into random pedestrians. Investigators report that several innocent bystanders were injured by the shrapnel. Namely, tiny pieces of half-digested Cheesy Poofs flung willy-nilly from the deceased’s anus like some sort of rectal volcano. One injured party shared this comment with Yell! Magazine:

“It burns in my eyes! It was like orange Gatling gun fire, pelting everybody with cheesy projectiles of doom! Oh God, there’s some in my mouth! DOOOOOOOOM!”

To eulogize this great man, we talked to his colleagues at Yell! Magazine. The assembled group was so overcome with savage loss that, in the interim five minutes between learning of their friend’s death and our visit, they had already passed through the first six stages of grief. Brave, noble acceptance was their shield against this tragic loss. We approached Shawn Loeffler, one of TheMatt’s greatest friends and supporters, for a comment but he couldn’t stop laughing and rolling on the floor hysterically long enough to catch his breath. The poor man was evidently too caught up in his pain to speak.

Jamie Lee, co-worker and occasional attempted murderer of TheMatt, shared her thoughts on the matter with us.

There, there, I admonished, nobody was to blame for this tragic incident. Well, maybe Frito-Lay.

“It was me! I placed a curse on his Cheesy Poofs. I asked the Dark Lord Baal to destroy him for me. TheMatt kept jumping out from behind the potted fern at the water fountain to dry hump my leg while whistling “In-a-gadda-da-vida” like an Irish folksong! I asked Baal to kill his ass. I didn’t think he’d take it so literally…”

King Hazard, affectionately referred to as Evil Tormenting Boss #1 by the deceased, had this to say:

Clearly, the gaping, open wound the death of his friend had left was still raw.

“It’s about fucking time! Who did it? Did it hurt? Was it a long, drawn-out death or did they put two in the back of his head and call it day? Oh, God… I hope it hurt. I hope they unleashed a pair of trained attack badgers on his testicles. Wait, where’s the body? Did you check for a pulse?”

I put a gentle hand on the distraught Ladanyi’s shoulder and informed him of the method of his friend’s demise. A pleased grin crossed his lips. “He died as he lived.” How’s that, I ask?