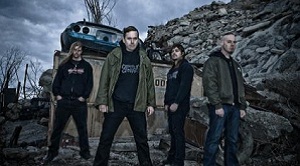 Cattle Decapitation are preparing to release their latest effort, Monolith of Inhumanity. As such, they are teasing us with a three-part series of in-studio videos, the first of which can be seen here. The band has also made the first single, “A Living, Breathing Piece of Defecating Meat,” available to be heard.

Now, don’t get me wrong, death metal, deathgrind, whatever, is a genre that I’m becoming more and more attracted to – and I have no idea why – but am I alone when I find some of the genre’s song titles humorous? And am I also alone when I hear Travis Ryan’s deep, guttural growls and am reminded of a powerful toilet sucking your business down with great force and velocity?

Anyway, check out the media and the press release below.

California-based progressive grind conquerors Cattle Decapitation reveal the first of three in-studio video segments from their Monolith Of Inhumanity recording sessions. Set for North American release on May 8, 2012, the record was produced by Dave Otero of Denver’s Flatline Audio and sees the band exploring innovative new techniques in song writing without abandoning their signature formula of confrontational audio wreckage and self-loathing lyrical content.

Check out Dave McGraw’s drum demolition and behind-the-scenes studio footage (above) as well as first single “A Living, Breathing Piece Of Defecating Meat”:

Monolith Of Inhumanity is an achievement that stands out as one of the most volatile, ambitious, and impossible to aptly categorize records you will hear in 2012. Dragging their ever-evolving deathgrind sound kicking and screaming into the epic territory inhabited by the likes of Dimmu Borgir and Anaal Nathrakh, the quartet redefine all perceptions of what Cattle Decapitation is. With their seventh full-length album, the band have never sounded more focused, aggressive, or manically determined to get in the faces of those who erroneously believe they’ve already experienced the band at their extreme best.

The 11-track Monolith Of Inhumanity features a host of guests including Mike Majewski of Devourment (guest vocals on “Projectile Ovulation”), Lenard Leal of Cephalic Carnage (backing vocals by on “A Living, Breathing Piece of Defecating Meat”), The Cephalic Carnage Community Men’s Choir, consisting of all current Cephalic members and alumni Jawsh Mullen and Zac Joe (gang choir vocals on “The Carbon Stampede”), and ambient and noise interludes by Los Angeles’ most extreme decimator of sound, John Wiese, as well as another strikingly brutal cover by Wes Benscoter.

In addition, Cattle Decapitation collaborated with famed pop-culture artist Tom Bunk, best-known for his work for the 1980s Garbage Pail Kids trading cards and MAD Magazine, for a very special art project. Bunk was gracious enough to create individual pieces of art for each member of the band, heavily influenced by and practically just as they appeared in the Garbage Pail Kids series of the ’80s! A GPK-inspired Cattle Decapitation trading card set and T-shirts are included with special limited pre-order packages and collector’s bundles. More info available at metalblade.com.

Cattle Decapitation recently returned from the successful Reborn of Death European Tour with Suffocation, Blood Red Throne, Cerebral Bore, Adimiron, Sadist, and Ulvedharr and will take a short break before heading out on the Occupation Domination 2012 with Origin, Decrepit Birth, Aborted, Rings Of Saturn, Battlecross, and more!

“CATTLE DECAPITATION have the sort of skills that put them squarely at the head of grind’s noisy pack.” — MetalSucks