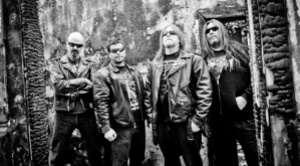 CALIFORNIA – From the macabre tomb of Bay Area death metal pioneers, Autopsy, comes an unrivaled insight into its world of gore and horror in the form of a new DVD, Born Undead, due out on June 5th in North America on Peaceville Records.

Born Undead charters the birth, death and rebirth of the legendary act, with an extensive documentary conducted with the band members as they describe how the beast came to be, and the impact their music has had on the metal world over a span of more than 20 years.

The film also documents the band’s long-awaited return to the studio and stage, and includes rehearsals of both new tracks and old classics for Autopsy’s live comeback assault. The trio of 2010 reunion shows are all featured, with all the best classic tracks from Maryland Deathfest, PartySan festival and also Hole in the Sky in Norway, where Chris Reifert, Eric Cutler, and Danny Coralles were joined by Dan Lilker on bass.

With hours of footage, as well as extras including the band’s promo video for “All Tomorrow’s Funerals,” “My Corpse Shall Rise,” and more, Born Undead is the ultimate set for all Autopsy and metal maniacs alike.

The DVD also contains artwork from Kent Mathieu, who had collaborated with the band on its early classic (and often controversial) album covers.

One of the early breed of U.S. death metal acts, and most respected names in the genre, Autopsy formed in 1987 in San Francisco, and released four albums on Peaceville Records – beginning with the classic debut Severed Survival in 1989 – before disbanding in 1995 with members going on to form Abscess.

Autopsy triumphantly and officially returned from the grave after a 15-year hiatus with the 2010 EP The Tomb Within, delighting critics and fans alike. The band then released its fifth full-length album, and first since 1995, Macabre Eternal, in 2011.