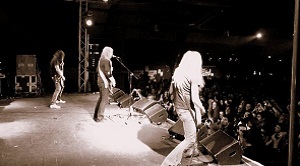 Agoura Hills, CA – February 20, 2012 – Legendary British metal act Angel Witch are proud to unveil their new album As Above, So Below. The Jaime Gomez Arellano- (Ghost/The Gates Of Slumber) produced album unites newly penned yet timeless-sounding material, such as “Geburah,” “The Horla,” “Brainwashed,” and “Upon This Cord” with four long-lost tracks from the classic era. “Dead Sea Scrolls” and “Witching Hour” both date back to ’83/’84, while “Into The Dark” and “Guillotine” are older still. Both were live favorites during Angel Witch’s late-’70s heyday, indeed “Guillotine” was actually intended to have appeared on the Angel Witch album.

Place your pre-order now at MetalBlade.com.

Angel Witch will be performing on Saturday, March 17th in London at The Garage with Grand Magus and In Solitude. For more information, check out the event on facebook HERE.

As Above, So Below track listing: