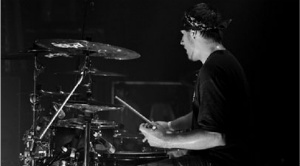 Has YouTube really become the audition platform for bands, either just starting out or looking for replacement members? Remember Arnel Pineda replacing Steve Perry in Journey? There are undoubtedly a handful of others who’ve made the leap from obscurity to new-found fame within an established band, but below you’ll find an inspirational story of one Nick Pierce.

Fans who have recently seen Unearth live in Alaska, Japan, and on their U.S. and Canadian tour with Chimaira, may have noticed a new face on the stage. The guy behind the kit has been none other than up-and-coming drummer Nick Pierce.

Nick Pierce is a self-taught drummer who has played since age 10. He grew up playing for local bands in the Seattle/Tacoma area (Culling the Weak, Eterna Nocturna, Embalmed) as well as the L.A.-based band The Faceless. Nick first sat in behind the kit for Unearth in May of 2011 during their two-show trip to Alaska. Unearth discovered Pierce on YouTube, where he had posted a number of videos of him covering Unearth songs, among many other songs from other bands.

Vocalist Trevor Phipps adds, “Nick is a beast of a drummer and a great guy to hang with. I look forward to jamming with him around the world for years to come.” Guitarist Buz McGrath compliments Pierce and says he has a “great attitude, energy, and the knowledge that we can throw the most insane riffs at him and he can create and adequately perform next-level beats for said riffs makes it a little easier to sleep at night.”

Nick Pierce shares his excitement about joining Unearth, “I’ve been a fan of Unearth for many years and I’m excited to shred with a great group of guys and support our fans.”

Drum aficionados and fans should subscribe to Pierce’s YouTube channel for more drum videos, as well as a new eight-minute extended drum solo:

Check out what’s been said so far:

“A whirling torrent of passion and aggression” 4/5, Terrorizer Magazine

“It’s the band’s reawakened urgency and positivity that makes this like discovering them for the first time again.” Metal Hammer Magazine

“Darkness In The Light is a maelstrom of melodic riffs, screamy shouts and enough noodling to keep Guitar Hero nerds happy. But it’s not chasing maidens and slaying dragons; Unearth have enough of the ’90s straight-edge hardcore scene still left in their blood to give the lyrics an impassioned warrior cry against corrupt politics and wavering faith.” 4/5, Alternative Press Magazine