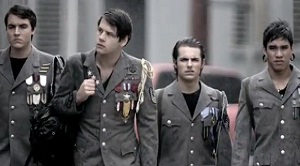 Attack Attack! have released their video for “The Wretched,” which appears on the forthcoming album This Means War.” While the video is cinematically and aesthetically pleasing, with great tones and colors, it’s purpose and meaning seem a bit convoluted. There’s also the issue of new vs. old Attack Attack!

Yeah, it’s metalcore, so it’s automatically not that good, kind of like a McDonald’s craving, which is always better than the heavy cement-in-your-gut feeling you get once the meal is done. However, there are elements of “The Wretched” that sound pretty good, meaning that it’s a pretty solid track musically. On the other hand, Caleb Shomo (what an unfortunate name) sounds just like every other pathetic high school dropout self-imposed angst-ridden metalcore wannabe rock star. Attack Attack! would sound better if Shomo just sang in a straight voice.

Please, feel free to Yell at me in the comments section below if you’re a metalcore fan. I’ve got thick skin. I can take it.

At any rate, the video for “The Wretched” is superior to the song, despite being confusing. At least it’s not a generic video featuring the band performing live with requisite shots of fans having the time of their lives. What makes it confusing are the shots of band in “military” uniforms and stripping medals off their chests (which seems to be a political statement especially given the lyrics, “this time it’s not my perspective”) interspersed with “wanted” and “traitor” posters, and a culminating shot of the band facing a group of rebels and ending peacefully. Perpetuating the “political” statement is the lyric, “I put my life on the line for you,” which gets convoluted into some sort of broken-hearted love story by the follow-up lyric, “so why did you say goodbye to me?”

I’m going back to listening to some Noctem, but check out the Attack Attack! video for “The Wretched” and let us know what you think, and if you can…