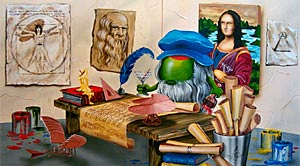 Michael Godard is one of my personal favorite American artists. I first took notice of Godard’s olive paintings when he appeard on an episode of Criss Angel Mindfreak in Las Vegas. It’s the episode in which Criss Angel did an amazing illusion, removing elements like the traditional martini glass and a poker card from one of Godard’s paintings. Since then I’ve always been fascinated by his artwork, and happened to purchase a limited edition duplicate called “The Whale.” It was signed by artist, Michael Godard, and numbered 42 of 150. What can I say, I was immediately hooked on it when I saw it on sale at an art gallery in Hawaii during my vacation. Even if I paid a hefty price for it, and it’s no original, it looks mind-blowing in dim light up on my wall. No regrets whatsoever.

I’ve never had a chance to meet Michael in person, but if you live in Atlantic City, here is your chance to meet him yourself at the Oh My Godard Gallery at the Pier Shops at Caesars for a special in-store appearance on December 3rd and 4th.

Check out the event details right below from the press release. This is not to be missed!

Just in time for the holiday season, “Rock Star of the Art World” Michael Godard, will return to the Oh My Godard Gallery at the Pier Shops at Caesars for a special in-store appearance on December 3th and 4th. This event is the perfect place to purchase one-of-a-kind gifts for art enthusiasts and Godard fans alike.

At his holiday Atlantic City appearance, fans will be able to meet Godard, purchase original works and his top-selling book, Don’t Drink & Draw. The oversized, coffee-table book covers Godard’s journey from his troubled childhood to his life as a Number 1 best-selling artist. Godard will sign and dedicate those books purchased as a special keepsake for fans. In addition to the book signing, Godard is available to work with collectors to create original sketches. Those interested in the opportunity to work with Godard to infuse an original idea with his traditional characters and style may purchase a blank canvas. The canvasses are available for preorder in three sizes and are priced from $2,500.00 to $4,500.00.

For those interested in purchasing original Godard works, this event will be fans’ one and only chance to purchase Godard’s most recent collection, The Master Series! The Master Series honors six masters of the art world in a six piece collection. Each piece pays homage to one olive-like artist, including: Warhol, Da Vinci, Pollock, Van Gogh, Picasso, and Dali. All with matching print numbers, The Master Series Gallery Proofs will be exclusively available at Michael Godard’s two-day appearance.

Godard’s refreshing perspective of life through art imaginatively mimics just how he likes his martinis – with a twist. He explains, “In my world, art has no limits. I used to follow the rules, but now I just paint how I want.” His compositions mirror our lives through martinis with animated olives, drunken grapes, dancing strawberries, and more idiosyncrasies including his own vices of gambling and the good life. His distinct paintings have taken the conservative art world and turned it on its heel, redefining art as we know it.

His paintings are currently in the homes of rock stars, movie stars and private collectors – young and old. Featured in galleries from Las Vegas to New York City, Michael Godard’s distinctive style can be seen in his most recent piece, Da Vinci. The manic composition combines bold colors and humorous imagery bound to catch your eye.