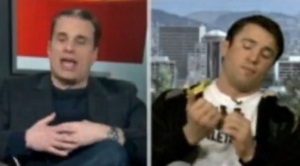 This is awesome and hilarious and purely entertaining. UFC’s Chael Sonnen walks out on an interview.

That’s right, and while the often-controversial Sonnen wasn’t being completely fair to Michael Landsberg, of the Canadian-based Off The Record, it’s surprising that he didn’t walk out sooner. See, he walked out on the interview’s second take; there was a whole first take that failed miserably. In fact, the first take didn’t even start out right.

Seems more like a case of “wrong question at the wrong time.”

Check out the video and let us know what you think of Chael Sonnen. We think it’s funny as shit.