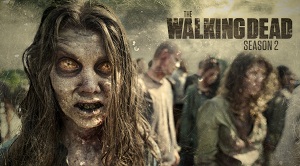 I’d be remiss in my review of The Walking Dead “What Lies Ahead” if I didn’t include a rant about some of the behind-the-scenes shenanigans that have plagued production. First, executive producer Frank Darabont fired his writing staff despite their earning a nomination at the Writers Guild of America Awards. Then, unable to cope with a TV budget, he got the boot from AMC, forcing Glen Mazzara to step up as show runner and hire a new team less than four months before the premiere. Some blame the network for putting all its eggs in the Mad Men basket, but I’m more inclined to point the finger at Darabont, whose cavalier approach denotes condescension toward the very medium he’s chosen for this project.

The Walking Dead – “What Lies Ahead” Trailer

At any rate, Season 2 of The Walking Dead promises to be a bumpy ride, what with its reduced budget already half spent and a fresh creative team rushing to meet the old one’s deadline. Consider the exciting, new environments introduced in this episode, the variety they offer in terms of decor: we got to see cars, trees, a pond, trees, a chapel, and some more trees. I don’t think the producers could have been more obvious if they’d stranded our heroes in a giant glass bottle.

By the way, I mention this without reproach. As a long-time fan of B-level horror, I hold the firm belief that those who do with what they’ve got should be celebrated and that Darabont should, therefore, get no cake. Besides, I dug the hell out of the zombie herd, even though its sudden appearance on the highway makes Dale the worst lookout ever. It goes to show how much suspense can be derived from just good timing, atmosphere, and a touch of violence. By “touch,” I of course mean the touch of a screwdriver jammed repeatedly into a rotting eye socket.

On that subject, is it just me, or have our heroes unleashed their inner Ken Foree over the summer? Their undead kills seem more decisive somehow, angrier. It’s as if the fall of civilisation, or rather the news of it, caused them to let go of any pretence of gentility, driving them one step closer to their primal state. I don’t think I’m ready for them losing hope just yet, but gruesome pragmatism has its advantages. Take, for example, Rick and Daryl’s awesome zombie dissection, my favorite bit in the episode.

Then again, maybe the gang’s pent up aggression stems from having to listen to Lori, Carol, and Andrea’s incessant whining. Mind you, I get where each is coming from. My issue lies in the characters explaining their every motivation instead of, say, living by them: “I didn’t want your blood on my hands, and that is the only reason I left that building!” The clunky Dawson’s Creek yammering gets so intense our heroes run out of shoulders to cry on halfway into the episode.

Cue the expository church confessions. I’ve never cared for the cliché on account that folk don’t normally talk to God out loud unless they’re preaching or exclaiming profanities. As such, the notion of two people delivering intimate spiritual tirades in front of a crucifix, with their friends standing just behind no less, stretches credibility a bit thin for me. Still, I enjoyed the fake-out with the deer. Rick asks God for a sign; God kicks him in the metaphorical nads by putting a bullet in his son’s chest.

That’s the thing. Though its execution feels rushed at times, The Walking Dead “What Lies Ahead” sets up promising ideas for the series’ sophomore season, often the hardest to survive. I like that some of our heroes want to leave the herd, as it were; I like that Shane has got Rick’s back despite his jealousy; and I love Dale faking an engine failure to avoid the classic ethical dilemma. Incidentally, does anyone else find it suspicious that Carl and Sophia are given possible exits just before hitting their growth spurts?