Trailer: “Banana Motherfucker” Will Turn Your Stomach Inside Out – Literally! 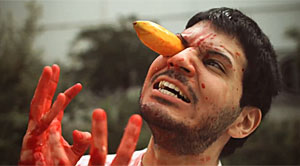 Tacos, vegetables, and fruits! Does it really matter how you decimate a victim in a horror comedy? Well, a very small group of filmmakers known as The Clones in Lisbon, Portugal, seem quite fascinated by this genre, and have crafted a 15-minute short that promises 80 deaths by a banana. End result: you get a wacky title called Banana Motherfucker.

That sounds ingeniously demented, ambitious, and wicked! I honestly can’t wait to see the scale of deaths possible with a single harmless fruit. But before you get a chance to see the full horror unleash online, the producers have decided to first showcase their baby at film festivals (it premiered at Frightfest 2011).

Personally, I’m not all that familiar with Portuguese cinema in terms of horror, and it seems to be possibly extinct — as stated on the website belonging to the creators of Banana Motherfucker. Since I’m a huge fan of foreign films, I got a little curious and looked around the Internet(s). I came across a few film titles like A Maldição do Marialva, I’ll See You in My Dreams (short), and Coisa Ruim, all of which have positive reviews and I may just have to watch someday.

If you haven’t already seen the trailer for Banana Motherfucker, just click the play button on the video above, and enjoy this horror hilarity!