If Your Spidey Senses Are Tingling, Then It’s “Time” For You To Save Everybody’s Favorite Webhead in Spider-Man: Edge of Time 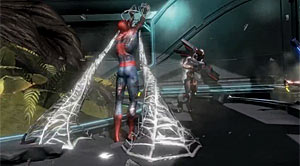 “Just like with Spider-Man: Shattered Dimensions, Beenox is bringing a fresh perspective to the series with Spider-Man: Edge of Time,” said David Oxford, Executive Vice President and General Manager, Activision Publishing, Inc. “Dee Brown and the team at Beenox worked closely with Marvel’s own veteran writer and co-creator of Spider-Man 2099, Peter David, on a high-stakes narrative experience where the ultimate challenge is not only to save the world, but also save Spider-Man himself.”

Playing as the two extremely different personas of Peter Parker and Miguel O’Hara, both heroic web-slingers must urgently work together to correct a timestream gone awry, save each other, and prevent the death of the Amazing Spider-Man. With the story’s two timelines evolving in parallel, each Super Hero must navigate through “cause-and-effect” gameplay moments, utilizing Spider-Man: Edge of Time’s picture-in-picture display where the actions of one Spider-Man can result in immediate, and sometimes unexpected, effects on the other Spider-Man and his surroundings. Players will battle a variety of fan-favorite and all-new villains, including Anti-Venom and Black Cat 2099, using expanded combat abilities specific to each timeline — from Spider-Man 2099’s close-quarters brute force, futuristic enhancements and gravity-defying acrobatics, to the Amazing Spider-Man’s evasive techniques, upgraded web abilities and ranged tactics, as they race against time to preserve the balance of both worlds.