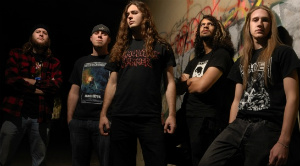 Warbringer might not be the best thrash metal around, but it’s certainly not the worst. Also, hearing just “Shattered Like Glass” isn’t sufficient to judge Warbringer’s latest effort, Worlds Torn Asunder, which will be reviewed on Yell! Magazine in the near future.

In all honesty, however, “Shattered Like Glass” sounds a lot like early era Slayer (minus the King talent), especially when vocalist John Kevill sings the word “mortality.” And when the band comes in to sing/chant “You won’t last” and “Shattered” you can’t help but think of Anthrax. Take a listen and you’ll see both counts.

The video itself deals with dual personalities, effectively done with the all-powerful mirror device, which also shatters at the end to signify the victory of one personality over the other. It’s kind of a cool video with a bit of a psychological thriller/horror vibe to it. However, Megadeth thematically did this to greater effect with “Sweating Bullets” some 20 years ago.

Since this is a video review I am going to comment on John Kevill’s “performance,” even if he does hunt me down and kick my ass. (Dude, you sounded great though.) When watching the video for “Shattered Like Glass,” try to forget the late ‘80s and early ‘90s, which Kevill has so clearly invoked. It’s like watching Killer Dwarfs combined with Ugly Kid Joe combined with Faith No More. Seriously, check out “Keep the Spirit Alive,” “Everything About You,” and “Epic” — take note of the cocked heads and the swinging of hair to one side of the head, oh, and the crazy eyes at the camera.

Warbringer is currently on tour promoting Worlds Torn Asunder; click through for the tour schedule…