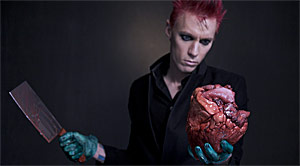 Independent artist Blue Stahli (aka Bret), is leading a charity campaign this week (Aug 29 – Sept 4) to raise support and awareness for not only his debut album, but for donations to Free Arts for Abused Children, which is a cause that hits close to home and that Bret is passionate about. Using a Pay-What-You-Want Model ($1.99 minimum) powered by Fan-It from the recent start-up YAWMA with 25% of all donations going to Charity, fans can snag up the 10-track debut Blue Stahli album, along with 2 bonus tracks, including an alt acoustic version of a track plus an unreleased instrumental track from an upcoming album.

As a special incentive to participate in the event, a $1,000 goal was set (and quickly achieved) to unlock a special acoustic YouTube performance of a song of choice from fans and a Top Donor prize was set to award the largest contributor with a personalized private video performance of an additional song.

As of day 1 of the 7 day campaign, the event has already received $5,000 in donations and is quickly gaining traction amongst tweeters and gamers, including World-of-Warcraft legend Swifty, who will have soon posted his own support video for the campaign on his popular YouTube Channel, which has received over 45 million views.