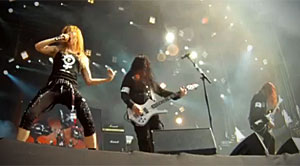 Just ahead of the start of their North American Khaos tour in September, Arch Enemy have just released the video for “Bloodstained Cross.” The video is short of spectacular; it’s basically just a bunch of live footage of the band playing in different locales throughout the world interlaced with some appropriately religious sketches in photographic images. Still, if you’re planning on seeing Arch Enemy, like we are, live on the upcoming tour, this is a great way to whet your palate.

Supporting Arch Enemy on the North American leg of the tour are DevilDriver, Skelonwitch, and Chihonic. We’ve already interviewed DevilDriver and we’re hoping we can score one with Arch Enemy. Wish us luck and we’ll keep you posted.

If you haven’t heard Arch Enemy’s Khaos Legions, check out our review and get a taste with some sound bytes.