One Giant Leap for Zombie-Kind On The Moon: Activision And Treyarch Launch Rezurrection To Eradicate The Infestation 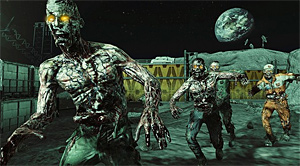 Moon features outrageous new weapons, futuristic gear, and hordes of low-gravity undead beasts delivering Black Ops‘ most expansive, visceral, and otherworldly Zombies experience yet. Meanwhile, bolstered with the firepower and visual splendor of Black Ops, players can relive the nightmare of “Nacht der Untoten,” escape the Zombie madness in the asylum of “Verruckt,” battle back the undead Imperial Army of “Shi No Numa,” and pull the plug on “Der Riese,” the zombie factory that started it all.

“Our Zombies fans are so incredibly engaged with us in the ongoing development of the franchise, and we’re excited to deliver them our first all-Zombies content package,” said Treyarch Studio Head, Mark Lamia. “Rezurrection is Zombies nirvana, with four of our best Zombies experiences, topped off with the awesome, all-new level, Moon.”

Additionally, the team at Treyarch has once again partnered with avid Call of Duty fans and rock superstars, Avenged Sevenfold, to feature their classic track, “Nightmare,” in the Moon level of the Rezurrection map pack.