Hellraiser: Revelations Being Slammed Left & Right… Even By Clive Barker 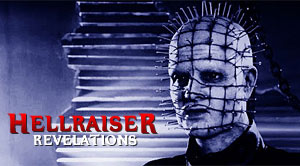 What happened before Hellraiser: Revelations…

Víctor García is the man behind the direction of such films as Return to House on Haunted Hill, Mirrors 2, and an amazing horror short called El ciclo. I say “amazing” because when I first saw the El ciclo short a few years ago it blew my mind in terms of story telling, cinematography, and especially the makeup effects. Overall, it was simple, and perfectly executed even if it only lasted less than nine minutes.

At that time, I have never heard of the director, and I started doing some research on his background, and discovered rumors of him being picked up to direct a Hellraiser sequel. In the back of mind, after watching El ciclo, I figured this could be the right person to make another great addition to the sadomasochistic franchise that we all love, and that made Pinhead the dominate Cenobite (Doug Bradley) a horror icon from the ’80s along side Freddy Krueger, Jason Voorhees, and Michael Myers.

The pictures, the official trailer, and a pissed off Clive Barker…

When the pictures for Hellraiser: Revelations started to spread like wildfire, and a glimpse of a new Pinhead (played by Stephan Smith Collins) emerged, it was official that Doug Bradley was out. Horror fans where shocked, giving instant negative reaction to all of the circulating pictures, specifically of Pinhead. This was of no surprise to me; Doug Bradley is Pinhead, burned in our minds as well as Clive Barker’s — he’s not replaceable yet.

The same thing happened with the remake of A Nightmare on Elm Street when Jackie Earle Haley took on the role of Freddy Krueger. But with time, the new Freddy seemed to have slowly soaked in with some of us, and has gained some new fans along the way. Jeez! Even the new Freddy is available as a downloadable character in Mortal Kombat.

The official trailer for Hellraiser: Revelations was released online a few days ago, and I can say it hasn’t helped at all in terms of building some positive hype for the film. In fact, the trailer has opened up a whole new spree of negative comments regarding Pinhead, Pinhead’s voice, the acting, and makeup effects. Even Clive Barker is pissed off that his twitter followers are mistaking it for a film made by him, and here is what he had to say via twitter some hours ago:

“Hello, my friends. I want to put on record that the flic out there using the word Hellraiser IS NO FUCKIN’ CHILD OF MINE! I have NOTHING to do with the fuckin’ thing. If they claim its from the mind of Clive Barker, it’s a lie. It’s not even from my butt-hole.”

Too bad people are associating this film with Clive Barker, despite the trailer clearly saying that Hellraiser: Revelations was “Inspired by Clive Barker’s horror classic.”

Maybe Dimension Extreme should reevaluate the release of this film, and make it clear to everyone what it is before making completes fool of themselves, and destroying Víctor García’s career. If the mastermind of Hellraiser doesn’t want any association with it, then something is clearly wrong here.

Hellraiser: Revelations will be available in limited theaters, and VOD September 1, 2011.

Pinhead is back and in his chamber of soulless delights, he thought he had two willing participants in Steven and Nico. But Nico wants out and decides that a member of Steven’s family will serve as proper barter.