Slipknot Maggots Unite Throughout The World 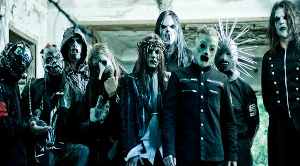 Slipknot Maggots the world over have cause to rejoice; they’re all invited to the 2011 Sonisphere Festival. That’s right! Spread the word motherfuckers. Slipknot’s performance on Sunday, July 10th, will be webcast live at 9 p.m. GMT (4:00 p.m. Eastern/1:00 p.m. Pacific). OK, so maybe the Slipknot Maggots aren’t exactly invited to the show, but it’s pretty damn close – well, it’s not that close, but if you can’t make the show because you’re not going to be anywhere near Knebworth, England, then it’s pretty close.

Yes, it’s great that this is actually happening, and we’re pretty sure that there are many of you who have nice, big 17-inch computer screens and 7.1 surround, but we’re also pretty sure that the majority of you don’t, which leaves us wondering: Why isn’t Sonisphere/Slipknot also broadcasting this in theaters, like the Big Four did? That would be sweet if for nothing else than to get close and cuddly with fellow Slipknot Maggots.

The band is looking forward to their first show in England in two years and since their bass player’s death:

“England has always been a special place for this band from the very beginning. We can’t think of a better way to culminate our celebration of Paul’s life than to share it with the Maggots at Knebworth, and the millions more watching around the world. This is not to be missed.”

You can catch the webcast either at Slipknot1.com or at Sonispherefestivals.com.

Hope to see you there… or whatever.