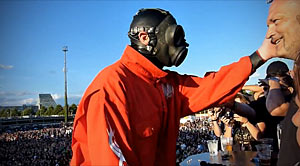 Crazy fuck! Sid Wilson from Slipknot leaps off a truck during the song Duality at Sonisphere Festival 2011. With Hellfest and Sonisphere now behind us, we’re hoping to get the same spectacle and crowd atmosphere at Heavy MTL coming up July 23rd – 24th. Although Slipknot and Iron Maiden won’t be the main attraction at this metaller’s festival, but will get a chance to see heavy performances by KISS, In Flames, Anthrax, Opeth and many more awesome bands listed here.

Saw something with more balls than this? Tell us about an experience you had at a Slipknot concert in the comment section below.

Words from the Video Uploader

While climbing on the truck he spilled my beer – you owe me one Sid!

Versus the end of the video a fan is rushed out of the audience by his friends for help, the medics performed CPR on him for quite a while afterwards before he was loaded into an ambulance, I hope he made it. Thoughts and prayers go out to this guy. – Protyreus