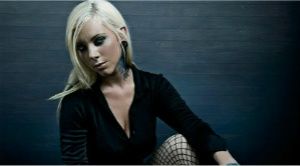 It should come as no surprise that we here at Yell! Magazine love heavily tattooed women. We also love women in heavy metal and rock. Combine the two and, well, we just get weak in the knees.

If we’re to be honest with ourselves and you, heavily tattooed women embody none of that fantasy described above. These women are usually sweet, kind, and charming individuals. But it’s the fantasy that keeps our interest locked.

Of all the women in the industry, we’re giving the crown to Maria Brink today. Founding member and frontwoman of the metalcore band In This Moment, Maria is capable of producing both angelic straight vocals and nightmare-inducing screams and growls. Formed in 2005, and releasing their first album in 2007 on Century Media, In This Moment and Maria Brink have experienced a meteoric rise. Winners of several awards despite their infancy as a band, In This Moment is getting ready to release their fourth album in 2012.

As the primary lyricist, Maria Brink writes personal songs with enough room for fan interpretation. Although appearing to a be a sincere, gentle, and well-balanced woman today, Maria has overcome many obstacles, such as those having to do with childhood abuse and the ensuing problems/issues that will accompany such trauma. We have nothing but respect and admiration for her and her ability to overcome such issues to become a metal icon with a heart of gold.

In This Moment – The Gun Show