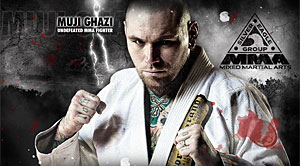 Muji Ghazi is an undefeated amateur boxer and amateur MMA fighter, winner of the 2006 South East Golden Gloves and a Georgia Games gold medalist in boxing. With almost a decade of training under MMA fighter Muhsin Corbbrey of Champions Training Center/Team Lloyd Irvin, Ghazi is a top-ranked South East Muay Thai fighter, No Gi grappling champion and Brazilian Jiu Jitsu blue belt. He trained six days a week, three times a day to participate in almost 30 amateur fights. A devoted family man who is still hungry for competition, Ghazi continues to train for future wins. As a National Academy of Sports Medicine certified personal trainer, Ghazi is committed to developing a disciplined and structured environment for all participants training for MMA at Silver Eagle Group’s MMA academy.

He sat down with Yell! Magazine and told us why training for MMA at an academy is more beneficial than training at the gym, how to find the best mixed martial arts facility, as well as what he looks for in a great coach (and how he strives to personify this).

1. Why is training for MMA more beneficial at an academy than at a gym? There are a lot of added benefits to it – it’s primarily an individualized workout when you train by yourself at a gym, unless you have a personal trainer, but when you’re training at an MMA academy you have a trainer and you have your team behind you to help you succeed in your goals. Statistics have shown that the majority of people, including athletes, aren’t as self-motivated as they are when they have someone behind them, so that’s why they seek out a coach.

There are also a lot of health benefits to training at an MMA academy like Silver Eagle Group – the routine is a little more intense than when you’re lifting or even doing cardio at the gym. When you go to an MMA gym like ours you’re still getting the fitness aspects that you get from the gym but you’re also learning a discipline that you can put toward real-life scenarios. When you train in Muay Thai and Brazilian Jiu Jitsu you learn about yourself, like how hard you can push yourself, and you can continue developing your skills.

2. What did you learn from training at an MMA academy? Well, I was in my first fight shortly after I started training and lost [a Muay Thai fight] – physically I was prepared but mentally I wasn’t and I lost pretty badly. So I stopped training for 6-8 weeks and thought I was going to quit. But then I realized that in order to excel at anything in this world, whether it’s mixed martial arts, a job and even daily life, success doesn’t come gift-wrapped – you have to push and overcome obstacles. I went back, started training again and fought 4-6 weeks later – and won by knockout. I found out a lot about myself – it takes will, courage and determination to obtain your goals. Any goal you set is attainable if you’re willing to push it forth.

I always kinda knew it was my calling. I got into the UFC when I was 19 (and I’m 34 now). I had always followed it and got started because there was a boxing gym near my house growing up. And it just took off from there.

4. It’s such a physically draining sport – how do you do it?

I have a really strong head (laughs). I’ve taken way too many shots in my day but God has blessed me with something great – I have won all my boxing and MMA fights. 5. What should someone who wants to start training for MMA look for when choosing an MMA academy?

In my personal opinion the strongest selling point is instructor credentials. You need to know where your instructor comes from and what they’ve done. Ask who they trained under – that’s important because it will help a person determine what to expect. Knowing who your team and coach are under will give you a better assessment of what caliber of training you’ll get.

6. If someone asked you for credentials would you be insulted?

Honestly, if someone came in and asked about my background, I’d feel like they were doing their homework. For 10 years all I did was live in a gym and all I did was train – that experience probably equates to someone who has done it for 15 years two times a week.

7. What are the qualities you should look for in a good trainer? Consistency is the key. Your trainer needs to be more consistent than you are. If you’re a motivated fighter, you want a trainer who is even more motivated than you are – that way, if you start getting tired and lazy, they’ll push you.

I had an awesome trainer – for me I need someone who will ride me hard, someone who can get me where I want to go. It’s something that, as a trainer at Silver Eagle, I am known for.

8. What advice would you give someone who has watched MMA and wants to get started in the sport?

The first thing I tell everybody is that there is a lot more to MMA than you see. The strength and conditioning classes we go through, which we do at Silver Eagle, is a completely different routine that’s very rigorous and structured. It puts your body through the type of training that simulates a fight without actually fighting. If you’re training in soccer, for example, you might do sprints, but in mixed martial arts we have to do the same sprints as well as push and pull various weights in different movements and directions at an accelerated rate of speed. We’re not going to the gym lifting weights – most of what we do is work on functional strength. We get lean and ripped because of workout, diet and more, and we’re honing in on our entire bodies when training.

Also, a lot of people think that when we’re down on the ground it’s just two guys rolling around, but when you’re on the ground there are specific ways to use leverage as a tool to get out of those threatening situations. Explosions of strength help, but you still have to use your techniques and that exact ground science to finish an opponent.

9. What sets Silver Eagle apart from other MMA gyms?

Our academy combines my experience with that of Master Shin Kim, an international Judo champion from South Korea’s National Judo team. We don’t water down our classes and churn out mediocre students. At Silver Eagle we are committed to giving students the knowledge they need before they actually come to an MMA class so that they reach their goals and become the skilled and conditioned fighters they want to be.