The Catalyst Are The Biggest Thing In Metal 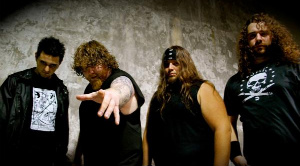 We here at Yell! Magazine were invited to the official album launch party for The Catalyst’s debut alum, Origins, and all we can say is these big-ass motherfuckers consume a stage and a venue like we’ve rarely seen.

As the evening progressed, each band got better and more aggressive (with the exception of Dush, who tended to perform more for the point-and-shoot camera than for the audience, and that chick lead singer… what fucking rock of desperation did she crawl out from under?) while the audience grew in numbers and in aggression.

The title of this review might be misleading (and it’s intended to be so) since we obviously know that The Catalyst have a ways to go before they become the biggest thing in metal – and even if they do everything right, it’s still a long shot. The point here is that these guys, with the exception of Teo on drums, are massive. Let’s just say that I would not want to run into these guys in a dark alley after drunkenly stumbling out of a bar. Seeing them reminded me of the line in the Guns N’ Roses song “Get in the Ring”: “And in the corner, weighting at 850 pounds…” except these are only four guys, whereas the Gunners at the time were like, what, 10? But physical mass isn’t the only reason The Catalyst are Big – they also have a big sound. Sure, stage mobility would have been an issue for the most diminutive of bands, but these guys looked like sharks in a kiddie pool, which their massive and aggressive sound only emphasized. Teo was buried behind his kit while the guitarist (Graham McDonagh) and bass player (Mike Marino) were locked on opposite sides of the stage with Matt Bailie delivering hell’s scream from center stage, but that didn’t stop this foursome from showing that they’re masters of their craft.

One of the few things missing from the live performance, which is present on the studio recording (produced by J-F Fortin, known for Neuraxis and Anonymous, and mixed by Alan Douches, known for Chimaira and Hatebreed), is that powerful bass blast that you feel down below and gets you in your bowels. The other thing that’s missing is a breather for fans, and this is also an issue on Origins; there’s no slow, sludgy track to give listeners a chance to catch their breath and reflect on some of the heavier material they’ve just heard. Even the most extreme of metal fans appreciates a moment.

One of the highlights of the metal mania was when vocalists Matt McGachy of Cryptopsy and James Arsenian of Endast joined The Catalyst to bring the set to a screaming close. Hey, powers are in threes, just ask The Father, Son, and Holy Ghost.