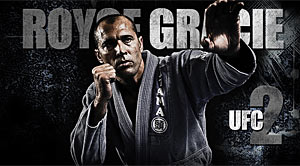 Remco Pardoel is an ox and skilled jujitsu fighter which showed in this match against Thai boxing legend Orlando Weit. Weit was an awesome physical specimen and although much smaller than Pardoel (5’10”, 170lbs compared to Pardoel’s 6′ 4″ 260) many thought Weit would win this fight. But as with almost every other fight in Mixed Martial Arts, it’s the guy with skills on the ground that wins.

This was Pardoel’s first appearance in the UFC as well as Weit’s, but unlike Weit, who disappears after UFC 2, Pardoel would return to the UFC to face Marco Ruas at UFC 7 (losing to the Brazilian).

Another quick contest, Weit had little chance to beat the larger Pardoel. Pardoel advanced on Weit until Orlando was against the cage. Pardoel then grabbed Weit but Orlando seemed to get the upper hand by getting to the back of the Dutch fighter. But Pardoel held to Weit’s right arm and used his leverage to hip toss the Frenchman.

Now having Weit on the ground with the full weight of his back on the Thai boxing champion, while still holding Weit’s right arm across his chest, Remco slid into a position to give space to strike with his right elbow.

After Remco gave Weit seven elbows to the head, Orlando was out cold. Pardoel recognized that Orlando was unconscious, and like a class sportsman he was, and every respected martial artist should be, he stopped striking the defenseless opponent. The fight lasted 1:29.

Although many didn’t see Jason DeLucia at UFC 1, he was a competitor. He fought Trent Jenkins in an alternate bout, but didn’t appear in any of the main fightsas no one withdrew.

DeLucia’s discipline is kung fu so you knew he was in over his head against Gracie. According to commentators, DeLucia had faced Gracie two years earlier in Brazil when DeLucia went to South America to test his skills and learn other disciplines (Gracie won). But in this fight, if DeLucia picked up any jujitsu, it didn’t show.

The fight lasted 1:07 and Gracie was never out of control of it. Gracie immediately pulled DeLucia to the mat into his guard when they grabbed each other after the opening bell. Royce then reversed DeLucia sliding out on Jason’s left side and took full mount on the American. DeLucia showed some skill using his hip to push Gracie to his side to try to escape but Gracie, like a crab maintained his top position.

Gracie then isolated Jason’s right arm giving up full mount as he did so. DeLucia then raised up to his feet seemingly free of Gracie but Jason’s right arm was still in Royce’s control and Gracie locked it in.

The referee John McCarthy (UFC 2 was the first appearance of the legendary referee) didn’t notice DeLucia’s tap as he was facing Jason’s back. As a result, the hold continued longer than it should have resulting in damage to DeLucia’s right elbow. When the lock forced Jason to to ground, McCarthy saw the tap and stopped the fight.