Iron Maiden From Fear To Eternity Coming In May 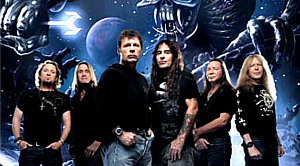 Up the Irons! Iron Maiden have announced that they will release a new “Best Of” album on May 23, 2011. The album, From Fear to Eternity, will chronicle the last 20 years (1990 to 2010) of the metal gods’ career, which is amazing because that is the second half of their legendary existence.

You know, we always hear about the longevity of such greats as the Rolling Stones, Black Sabbath, AC/DC, or even Pearl Jam, but rarely do we hear anybody singing the praises of how long Iron Maiden have been around, with little to no turbulence. Well, there was that time Dickinson left the band… but that’s water under the bridge.

Thirty five years later, 15 studio albums, 80 million albums sold, nearly 2,000 shows, and still no Rock and Roll Hall of Fame induction… c’mon, powers that be. Yes, there are many bands that are deserving to be in this elite class, but we metallers know what really matters and that’s a band’s dedication to its fans, which Maiden has in spades–or should I say aces. But we’ve all heard the rumors that these metal giants are going to call it quits pretty soon, and considering they’re on a tour entitled The Final Frontier World Tour, it might be safe to say that the Iron Maiden is going to take its last head pretty soon.

Here are the tracks that’ll appear on the two-disc From Fear To Eternity:

Iron Maiden are also promoting From Fear To Eternity with a massive world tour. You can check out the dates on IronMaiden.com, and keep in mind that more dates are to be announced.