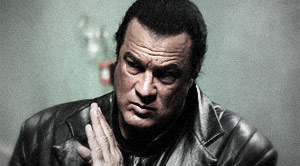 After Anderson Silva credited Steven Seagal with teaching him the front kick, Mr. Seagal has been absolutely milking it for all it’s worth. Seagal will tell anyone willing to listen, the whole entire back story of the front kick and how he learned it 40, 35 or 30 years ago (he just can’t seem to make up his mind on when he actually learned it himself) and spent a whole chunk of time “perfecting” it. It’s pretty funny actually, and if you watch Ariel Helwani’s interview with Seagal, he seriously looks like he’s about to front kick those chef’s creeping up on him (bad memories from “ Under Siege ” I suppose).