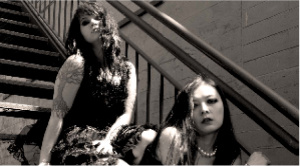 YM:I get a real ‘90s feel from your music, as if there is some Hole (I know that’s not great), Veruca Salt, and even some Joan Jett and at times Deborah Harry in it; who are your inspirations?

Dusty: Anybody who has anything bad to say about Hole is just trying to seem cool because everybody liked Hole…

Dusty: …OK, you didn’t, but Hole was a big cultural influence because there was a big stretch of time between musicians like Joan Jett and I would say even Courtney Love was different. Courtney Love, although she’s a fucking bitchy slut, I think we’ll all agree she did revolutionize women in music because she, OK she didn’t do anything different musically, but she was a fucking mess, she took as many drugs as the guys, she was as dirty and grubby as the guys, and I know that sounds weird, but in a way that’s still paving the way for women in music because a double standard is not something you want.

YM:There are a lot of female-fronted metal bands these days; what makes you any different?

Dusty: I don’t want to sound like a jerk, but there are some female-fronted bands out there who really bank on that whole thing like, we have vaginas and we play guitar, like wow, we’re so cool, we don’t have to write anything new or interesting, we don’t have to actually be good at the guitar, WE’VE GOT TITS…

Mar: So do some fat men.

Dusty: …so we really strive for quality and musical ability, we’re also socially and politically aware, although our songs sound a lot like kill and blood and violence, they’re covertly very political; we have songs about really topical issues, historical issues that involve feminism, social justice, things like that. So we’re aware. We’re intelligent. We’re good musicians. We’re not just vaginas. We also don’t think we strive to be overtly sexual on stage. Sex is part of rock and roll, but we’re not trying to be…

Mar: That’s not just our thing.

Dusty: I think overall we try not to be a one-trick pony, whether it’s sexuality or being a rock-girl band. Being a chick band is not good enough for us. Although on the same note, we’re very interested in women in music and I do think women in music is still like a novelty for a lot of people.

Mar: It’s still a very male-dominated industry so I do give a shout out for all the women out there who are doing it or trying to do it because it is a lot tougher for female bands to do it for various reasons.

Mykel: Just to get together is very hard for them.

Dusty: When I was young, I would listen to music on my Discman, back when we had Discmans, for the most part I would listen to male-fronted bands and I’d always visualize myself singing the songs; it didn’t have to be Courtney Love or whatever, it was like Danzig.

YM:We’ve seen it with bands like No Doubt where the woman gets all the media attention, so how does it feel to be a guy in a female-fronted band?

Mykel: For me, I like it because I’m the guy behind the camera most of the time so I get to take pictures of these pretty ladies, so it works for me. Plus, when I get to go up on stage I really get to release all that feeling, that energy and that makes for a more dramatic, bigger performance for me because I know I’m standing between these two gorgeous women. And what do I gotta do to make sure that I’m not invisible? I gotta jump up and down and be a crazy motherfucker.

Pynner: We’ve got a perfect balance right now. And as far as the media question, if I was in the audience watching us on stage or a music video or online photos or whatever, personally I don’t want to see the drummer if it’s a dude, I wanna see the chicks, so I have no problem being out of focus in the corner of the frame. I’m still 25% of the music and that’s the most important thing to me.

Mykel: To go further on that point, when we did the video for “Fault Lines” I said to the director that I just want to show Dusty’s face and Marlene’s face and me and the drummer just here [indicates chin down]; I realized at that point that in the media our best-selling objects, sorry women…

Dusty: Our best-selling features. It’s a double-edged sword; you don’t want to be valued just because you’re a female-fronted rock band, but at the same time you know that that’s your selling point. A lot of double think like the George Orwell 1984 book.

Dusty: We like to talk about how we’re feeling and hug, sleepovers.