As I Lay Dying: “Anodyne Sea” Will Leave You Numb 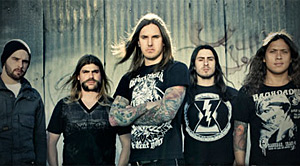 Formed back in 2000 and releasing their debut just a year later, As I Lay Dying put out their fifth studio album (The Powerless Rise) back in May 2010, and from that effort comes the latest video for the track “Anodyne Sea.”

As far as lyrical interpretation, I believe the song is about standing up for what you believe in even if you’re alone in your convictions and even if no one hears you. As the protagonist of the song does this and his views and ideas fall on deaf ears, he finds himself drowning in an anodyne sea. This is probably open to interpretation, but since anodyne is a type of analgesic used prior to the 20th century to soothe pain by affecting the brain and nervous system, I would say that our idealistic man had fallen into depression and substance abuse to numb the pain of not being heard or taken seriously.

The brand new video for “Anodyne Sea” reflects this interpretation in part, while also addressing the idea of censorship and big-brother control in the most extreme sense. Opening with a scene that previews what will happen, we quickly find ourselves in a radio station where there is an irate DJ announcing that “we” don’t share “their” (As I Lay Dying) views. Next there’s a physical confrontation between As I Lay Dying’s Tom Lambesis and the DJ, as Tom tries to make his convictions heard. As a result of his strong convictions and public desire to be heard, the radio station is raided by military types and we can only assume that they are the American censorship police/terrorists. The band is thrown into the back of a van and hauled off to their execution site–the final and shockingly poignant scene since we feel that we are a part of the experience thanks to the first-person filming of the video.

As for the song itself, “Anodyne Sea” is pretty standard metalcore fare, but the musicianship and vocals (a nice mix of metalcore grit and straight) are top-notch. Production is also excellent and it’s refreshing to listen to a band with experience and a reputation. I imagine this to be a stomper and an anthem during live shows.